This is a Three colour screen print including a final metallic Silver layer. The print depicts an electrical storm with chaotic cloud formations over shadowing a small tree. Taking refuge under the Orange tree is a small person adding scale and drama to the large jagged lightning strikes coming down around the lone figure. The final Silver metallic ink layer is printed over the top of the print to give the clouds and lightning and extra reflective quality. It was a bit of a risk putting the silver layer over last, i didn’t quite know how it would turn out, but thats all part of the fun of creating your own screen prints. After printing the full edition out myself and having enough time to digest the image. I realised that the silver layer has a number of functions. It acts as rain drops and also clouds, but also the jagged silver lightning shapes end up cutting into the clouds creating a half rain cloud half lightning bolt merged effect. 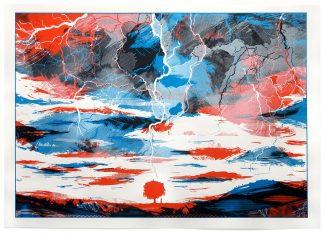 You're viewing: When Lightning Strikes £100.00
Add to basket